As the sun sets on this year’s ploughing, we can all sit back and relax after a tremendous three days. This year’s event marked the most successful in history with a record breaking 281, 000 people having landed in Ratheniska Co. Laois over the three days. The Farm Relief Services marquee proved once again to be a great success with floods of people coming in to chat to our team and sign up to the courses and services on offer.
The FRS team from all our divisions were out in force giving information about our services. Outdoors the FRS fencing team ran with a great display of the various fencing they supply and one lucky visitor, Rosemary Dunne from Tullamore won a €500 Tinsley wire voucher.
The FRS Training team were kept on th 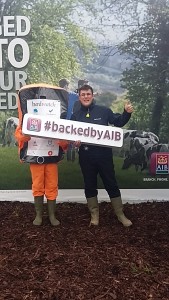 eir toes over the three days with their Boom Sprayer demonstrations. This was a great success attracting great crowds to the stand whilst the demonstrations were taking place. A large amount of people signed up for the sprayer course which is required to be completed by November 2015. Those who signed up for the course were entered into a draw to win a free course. A huge congratulations, to Thomas Dillon from Listowel, Co. Kerry who was the winner of the spraying course.
Herdwatch once again came out of the event with great results having gained 200 new subscriptions to the award winning App and talked to many of their current customers. The App itself is going from strength to strength receiving great feedback from all who came to visit them in the FRS marquee and also in the Innovation arena. The big attraction of this year’s ploughing event was the Herdwatch mascot Herdie who was out and about promoting Herdwatch and was a big hit on the trackway.
People of all ages stopped to get their photo taken with Herdie for the Twitter competition. Congratulations to the lucky winner from Kerry who won their county jersey for uploading a photo of themselves with Herdie. For each tweet about #Herdie, Herdwatch donated 50cent to Embrace Farm. A whopping €500 in total was raised for Embrace Farm thanks to Herdwatch.
This year we were delighted to have Tom Maher and Marie Spencer from St. Vincent De Paul who helped out at the FRS tea and coffee station for the three days. They welcomed everyone with a smile and kept the tea 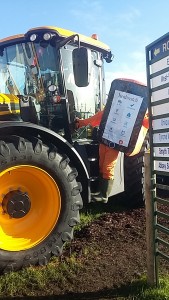 and coffee flowing. They raised over €900 for their charity at the event.
And so that is another year at the ploughing done and dusted. We look forward to planning for next year. Thank you to all the staff who helped out, to all our customers and the people who came to visit our stand. As always it is greatly appreciated.
For more information visit our website on www.frsnetwork.ie. Like our Facebook page for updates and news www.facebook.com/frsnetwork

This website uses cookies to improve your experience while you navigate through the website. Out of these cookies, the cookies that are categorized as necessary are stored on your browser as they are essential for the working of basic functionalities of the website. We also use third-party cookies that help us analyze and understand how you use this website. These cookies will be stored in your browser only with your consent. You also have the option to opt-out of these cookies. But opting out of some of these cookies may have an effect on your browsing experience.
Necessary Always Enabled
Necessary cookies are absolutely essential for the website to function properly. This category only includes cookies that ensures basic functionalities and security features of the website. These cookies do not store any personal information.
Non-necessary
Any cookies that may not be particularly necessary for the website to function and is used specifically to collect user personal data via analytics, ads, other embedded contents are termed as non-necessary cookies. It is mandatory to procure user consent prior to running these cookies on your website.
SAVE & ACCEPT